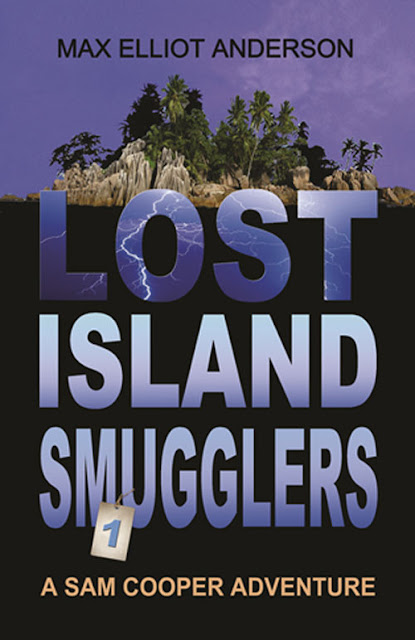 Sam Cooper had only recently moved to Florida when he met Tony at his new church. Tony’s father owned a marina.
Sam, Tony, and Tyler took scuba lessons together. Tony got them in for free. After they completed the course, the boys decided to try out their new skills in the real world…the ocean. The only problem was, none of them had permission.
While Tony’s father was away on a buying trip, the boys took one of the rental sailboats out for their diving adventure. Everything went well until the biggest storm Tony had ever seen, blew up from out of nowhere. Their boat was smashed to splinters and the boys found themselves stranded on Lost Island.
But, if they thought the worst had happened, they were wrong. The boys discovered a secret hideout that was used by drug runners in high powered speedboats.


Sam and his friends had to find a way to stop them, but how? And, even if they could, what were they going to tell their parents when they got home?

by Marilyn Rockett
Homeschooling Today Magazine
Boys love adventure, excitement, and challenge, but often they don’t like to read. Max Elliot Anderson, author of Lost Island Smugglers (Port Yonder Press, 2010), understands because he grew up hating to read. Now he writes adventure stories for boys aged eight to twelve (but girls love them too). What mother doesn’t want to find a book with good values wrapped around an adventure story her sons will enjoy? Fans of Anderson’s seven previous stories will notice that this new Sam Cooper Adventure Series departs from Anderson’s prior writing. His earlier books have had different characters and settings, but Lost Island Smugglers is the first in the new series featuring the same central characters. A Life-and-Death AdventureSam Cooper, the new boy in town again, hates to move. His father’s job as a research biologist takes the family to many interesting places, but it is always hard for Sam to find new friends before it is time to pack up and leave. He wants this move to Florida to be different, but when Sam meets Tony and Tyler at his new church, he doesn’t foresee how different it will be!Learning to scuba dive with his new friends begins as a fun adventure for Sam but turns into a scary, life-threatening experience because of the boys’ disobedience. A hurricane, a deserted island, and a secret hideout for some frightening characters with high-powered speedboats make the boys wonder whether they will live to see their parents again. They learn a lesson in truth and that it isn’t wise to try to get away with something thinking no one will find out about it. Some have said that Sam Cooper Adventures are like good family movies, and Anderson brings his award-winning film and video production experience to the written page in stories that will encourage boys to read. Additional titles in the Sam Cooper series, coming soon, include Captain Jack’s Treasure and River Rampage. To learn more about Max Anderson and his writing, visit http://www.maxbooks.9k.com. For interesting and fun information about raising boys and reading, visit Anderson’s blog: http://booksandboys.blogspot.com/.
Marilyn Rockett is a graduated homeschool mother of four sons, grandmother to five home-taught boys, and great-grandmother to one boy. She has read to boys for countless hours and survived their adventures.
Originally published in Homeschooling Today® magazine  Used by permission. All rights reserved.***************************************The Lost Island Smugglers was an extremely enjoyable book. I felt that each character was well-developed and I could feel what they were feeling. I enjoyed the struggle against the storm, how they gradually got weaker as the storm progressed. I really like how Sam took charge and was able to help them survive. The book, in all, was very exciting and it really kept me at the edge of my seat. ~ Brittany C. Age 13***************************************Reviewed by The Old Schoolhouse Magazine
"Sam wondered what kind of bad thing Tony was thinking about doing. He didn't want to be part of anything he could get into some serious trouble for."
Sam's family is moving--again. This time his dad's job is taking them to Florida. At first he's worried about making new friends, but he ends up meeting two kids right away--Tony and Tyler from church. Tony's dad owns a marina and treats the three boys to scuba diving lessons. Once they've passed their final exam, Tony wants to brave the real ocean without adult supervision. Tyler's in. Will Sam risk everything to join in the fun? What follows is an extraordinary event none of them could have fathomed.
Lost Island Smugglers was the perfect book for my third grader, whose least favorite subject is reading. Max Elliot Anderson writes in everyday, conversational language, providing a simple yet enjoyable adventure story for children between the ages of 8 and 11. Even though there are 255 pages, the print is large. My son liked being able to read without the hassle of defining a long list of vocabulary words, answering comprehension questions, and discussing literary terms--things he says "take the fun out of reading."
My son really enjoyed this novel and even finished early. Because I used this book as part of his homeschool reading lesson, I did give an assignment--a book report. Writing a report was a great way for him to practice summarizing, ordering events, and writing complete sentences. Parents or teachers could also include moral discussions about divorce, lying, friendship, trustworthiness, and obedience.
At the end of the book, there is a picture and a short lesson on the catamaran, the same type of boat Sam, Tony, and Tyler sailed. Children can also read about how to make a shelter in the wilderness, but I think our family will play it safe and go with making the recipe for the delicious Chocolate Dessert!
You can provide your middle-grade reader with an easy-to-read adventure for just $8.95! I think this book is great for boys, especially boys who might not be overly excited when it comes to reading. I am already planning to buy the next book in the Sam Cooper Adventure Series for my son during summer vacation.

--"I would say that this is probably going to be my favorite of his books. That is until the next one comes out and I read it."
--"Lost Island Smugglers is a quality book full of family values that will keep your preteen boy entertained."
--"This book moves at a fast pace. There are no slow parts where your child will lose interest. It’s full of “Oh, no”s and “Now what are they going to do”s. My children enjoyed it thoroughly."
--"Because my son is such a reluctant reader, I knew he would not read anything I handed him, so we read this aloud. My daughter enjoyed the story just as much as my son did. I believe my son may actually read (on his own) the next book in the Sam Cooper Adventure."