2 Wolf Books to be Released 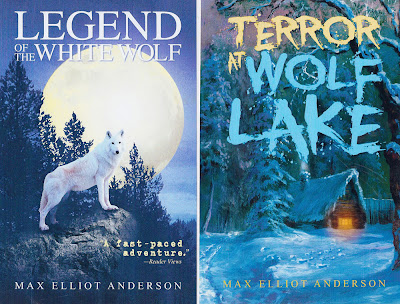 ﻿"Max Elliot Anderson brings a lifetime of dramatic film and video production to the pages of his action adventures and mysteries." Jerry B. Jenkins, Author
"Max's Adventures are like good, family movies . . . "
Bill Myers - Author
These two books will join 6 other titles already released.﻿
(# 1) Legend of The White Wolf
The Story

ISBN: 9781936695690
One day, Brian Fisher discovered a white wolf pup caught in a trap and set it free. Since then, Brian was convinced that he and the wolf shared a special bond. Stung by the disbelief of his family and friends, Brian sets out to prove that his fantastic story is true and ends up getting a lot more than he bargained for. He soon finds himself stranded in a snowstorm and attacked by a mountain lion. When a group of lawless hunters begins killing off the wolf population, Brian is caught right in the middle!


Take an eleven-year-old boy, a mysterious white wolf, a dangerous band of illegal hunters, and all the excitement of the rugged outdoors near Yellowstone National Park. Put it all together in a book and you have an adventure story even the most reluctant of readers will pick up and enjoy.

“Legend of the White Wolf should be included on every young boy’s bookshelf.” - Craig Hart


“Young readers of adventure stories will relish this. Adults who love and admire wolves will be charmed.” - Curled up with a Good Kid's Book


“Anderson knows how to spin a great story, and this reviewer again can envisage hundreds of young readers enjoying this tale as well as the other stories this author crafts so well!” - The Best Reviews


“I am thoroughly enjoying these books from Max Elliot Anderson, and I hope that the author keeps them coming.” - April Lowry


“It is easy to be pulled in to the story and to be engaged by his writing. Many readers will see themselves in the characters that grace the pages of this book. Another excellent book Mr. Anderson! Keep up the good work! We look forward to future releases!”         - Trisha Bleau


Eddy Thompson's hero is John Dillinger, one of the most dangerous bank robbers in American history. So it's no surprise that Eddy cheats on anything, anytime, anywhere. With school out for Christmas, Eddy's father invites Chet, Rusty, and their fathers to drive up to a cabin he owns on Wolf Lake, Michigan, for ice fishing, tobogganing, and winter fun. But something happens there that will change Eddy's life. One day, two real bank robbers toss their stolen cash over Eddy's fence in hopes to come back for it later, as police sirens race toward them. Of course, Eddy wants to keep it, and that's when their troubles really begin. With so much danger closing in and with the help of his friends, Eddy realizes how wrong it is to cheat. But the terror doesn't end there and follows them all the way back home.
“I enjoyed Terror At Wolf Lake because of the action and mystery. I felt scared when they were scared and felt good when they told the truth.” - Alex Kent

“Anderson’s books typically have a significant thrill quotient and this book does not fall short.” - Curled up with a Good Kid's Book


“I thoroughly enjoyed this book - and I'm a girl and haven't been a 'Tween' for, um, a number of years. I am still impressed. Max, keep writing!” - Peggy Phifer


“I highly recommend this work by Max Elliot Anderson. It offers adventure, excitement, fun, interesting descriptions of the outdoors and a valuable message too! Parents will enjoy this story right along with their kids!” - Reader Views


“Once again Max Elliot Anderson has penned a winner with Terror at Wolf Lake. I am eager to pass this excellent, sure-to-become-a-classic story of adventure on to my ten-year-old grandson.”             - Beverly J Scott


“This is a book for the keeper shelf. Your children will read it over and over. You might even want to save it for your grandchildren.”   - Laura V. Hilton


“A fine adventure story with something to teach about ethical living. Well worth the read!” - RebeccasiReads

Looking forward to getting your books for my son, who loves to read!
jennydtipton[at]gmail[dot]com