Author: Max Elliot Anderson
Audience: Middle School; especially boys
Words: 34000
Derek Snyder is about to begin his last year of middle school. This is the last chance he’ll have to feel in charge, before beginning at the bottom of the ladder called high school. He plans to be the captain of his football team, and everyone at school pretty much did as he said. Although his teachers were allowed to call him Derek, everyone else at school had to call him Snyder.
On the day he arrived for the first day of school, Derek was in for a huge surprise. He found his friends crowded around a new student. Even though Derek hated to admit it, this new guy was attractive in every way. Yet, he was not at all what he seemed to be.
Through this story, we learn that Chip used to live in a large city. There, he had been involved in gangs and had even been the cause of the death of another boy.
Derek is determined to push Chip off center stage; a place that only Derek rightly deserved.
This story captures the nuances of junior high identity struggles. Everything Derek had imagined unravels one after the other. Plus, there is plenty of exciting football action.
Readers will learn what is truly important in life as they witness the concept of a person being willing to give up his life for a friend.


This story is funny, exciting, sad, and touching, all at the same time. 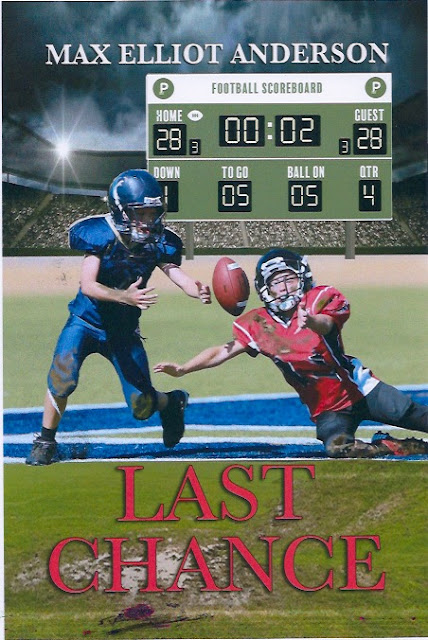 When I saw LAST CHANCE on my to-read-pile, I thought, football season has started. What an appropriate book for this time of the year. So I settled in for a footballish read written for tween boys.

Mr. Anderson's mission is to write for reluctant reader boys and teach them the love of reading and he is good at it. I was introduced to his books back when my (now adult) sons were tweens, and they were totally drawn into his books. Adventure, excitement, sometimes scary, all things that appeal to tween boys.

So that brings me to LAST CHANCE. Derek starts out to be a major jerk. In fact, I took an immediate dislike to him. He is arrogant, cocky, full-of-himself, bully, and king-of-his-world, but I kind of learned why when I met his dad. Wow, what pressure the kid was under. Plus, his family life was pretty sad too.

Chip is the new kid in town. A handsome, friendly, totally lovable chap who doesn't seem to be at all like a street-smart, gang member mentioned above. I fell in love with Chip. But when his story comes out - wow. I cried like a baby. What a testimony. A wonderful faith message, and a heartfelt ending ... Wow. My opinion of the book did a complete 180 and I can't say enough good things about the book.

Another wonderful mid-grade Christian book by Mr. Anderson. I'm not an avid sports fan, but I did raise two boys who are. And I recognize the bully who has been bullied. Another 5-star book!

Derek Snyder is the young man in junior high who has big aspirations--egged on by his dad--for being the team captain in his last year before going to high school. That was before the new guy showed up. He's tall and good looking, and the girls are going gaga for him. Plus he is way too athletic for Derek's good. How often does a new guy in the school get elected team captain? Derek isn't worried until that remote chance became a jolting reality.

No problem. Derek and his buddies will make sure he doesn't play. Dennis--big and not really all that bright--is assigned the job of pushing the new guy, Chip, off the track when they all go bike riding over a trail known as the Devil's Backbone. Instead of wrecking, Chip makes it out of what looked like sure disaster with only a layer of dust on his shoulders. Didn't even dent the jock's bright white smile.

Derek doesn't quit trying, but everything he does backfires. Instead of the new guy looking bad, instead Derek does. And Chip still has his smiling teeth gleaming at everyone. What tops the cake is Chip's invitation to Derek to go to church with him. And it all goes downhill from there.

If you have a football enthusiast in your family, you might want to get them a copy of this one. It's worth the price.

Find this and other exciting middle grade titles by Max Elliot Anderson at https://www.amazon.com/s/ref=nb_sb_noss_1?url=search-alias%3Daps&field-keywords=max+elliot+anderson
Posted by max at 8:33 AM