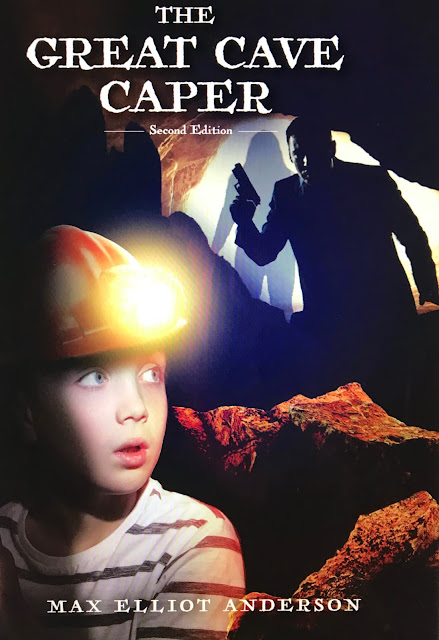 Synopsis
_________________________________
Four boys had formed a detective club in their little town where nothing much ever happens. That is, until they put their money together and ordered a police scanner for the shack where they held their meetings. The area around where they lived, in New Market, Virginia, was littered with caves. The uncle of one of the club’s members has a cave right on his farm. That’s when the guys hatched the idea of going out to the cave for a little innocent exploring. The cave was on private property, so they knew they’d be safe and no one could bother them. But on the night before their big adventure, the scanner came alive with reports of a big bank heist in a nearby city. The boys thought surely the robbers would be long gone by the time they set up their campsite near the cave. They were wrong. Inside the cave the next morning they found something. Now the robbers were coming in the entrance of the cave and the boys couldn’t get out.

*After learning of a bank robbery, they went on a camping trip and while exploring a cave, discover hidden loot from the robbery. Now they must figure out what the right thing to do is -- and deal with powerful temptations to the contrary. The Great Cave Caper is not only a rollicking good story, it has embedded within it some very good personal values for young readers to absorb.
Midwest Book Review

*Had me sitting on the edge of my seat.

*The author really made this book easy on the eyes because it didn't have many "big" words. Also, the author wrote in such a way that I could picture exactly what was going on, such as when Stewart was looking down into a hole in the cave and dropped his helmet. I could hear the flashlight coming apart from the helmet and breaking into the wall. I like this book because it was easy to read, yet it had me sitting on the edge of my seat wondering what was going to happen to the kids in the next sentence!

*Kept me glued until the last letter. I really liked the fact that they had a police scanner, just like I hope to someday. I also enjoyed all the cool facts about caves, and the eternal lesson of honesty and teamwork. This book makes a perfect gift! Five stars!

*This book is intended for younger ages, but in my opinion anyone of any age could enjoy this delightful book. And it comes with an extra feature at the end, a list of Hampton, Virginia’s police and fire department codes!

*Most significant in this story is the fact that Randy learns what a true hero is and how that connects with present events as well as major historical events in the not so distant past!!!
Kudos on a finely written tale – again

*The Great Cave Caper is an exciting read guaranteed to keep the interest of even the most reluctant reader. It is full of information about caves. I didn’t find anything I disliked. It held my interest from page one—and my twelve-year-old son is anxious to get his hand on the book and read it for himself.

*Writer Anderson has fashioned an easily read, action packed, high adventure novel sure to please middle grade readers. Anderson appears to know his audience well, boys in this age group often shy away from books in favor of action and activity. The Great Cave Caper is a book I will take to my classroom, 4th grade, with the expectation that the setting and plot will draw reluctant readers into the storyline. Heroism, life lessons, values and expectations for behavior are presented in a non-preachy manner.  Writer Anderson’s thrill packed page turner is filled with intensity, grit and determination. Anderson keeps the action moving. Quick-paced dialog, interspersed with adroitly wrought action scenes produce a certain winner for the target audience. Anderson’s command of language draws the reader into the work and carries interest from the opening paragraphs as Randy awakens at home in his own bed right down to the last lines as Randy discusses what true heroism is and how he can help honor the heroes, emergency workers, who work to keep us all safe each day. The Great Cave Caper is an excellent choice for the classroom, personal reading list and the school and home library. Enjoyed the read, happy to recommend.

Max Elliot Anderson - author of exciting adventures and mysteries for readers 8 - 13. https://middlegradeadventureandmystery.blogspot.com
Posted by max at 11:50 AM