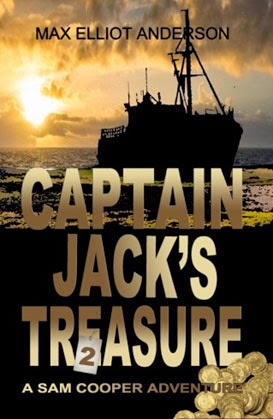 Book 2 in the Sam Cooper Adventure Series. Get all 6!


Readers will gain a new appreciation for family, they will learn about the dangers of greed, and oh the stories Captain Jack can tell.

By Jenifer Schaut My little boys absolutely LOVE pirates...treasures and adventure!
While my boys are a bit young for this story, at the same time this was a delightful, clean and adventure filled story that was packed enough to hold their attention for a chapter a day, reading time. As a parent that is always looking for quality literature that my boys can grow with (and doesnt include vampires and magic and demons, yuck!) this was a refreshing read indeed. One I am sure we will revisit too as they get older. *************************By Anne Payne "homesteading" (NC) It's so nice to see someone writing exciting fiction for young boys between the ages of 9 and 12. As the mom of two former reluctant readers, I wish this book, and it's counterparts, had been around when my boys were that age. Filled with wonderful characters, young and old alike, Captain Jack's Treasure is sure to keep even the most hesitant reader glued to the pages of this book.
What little boy doesn't want to be a pirate or a sea captain at some point in their young life? I really liked how the three friends worked together with Captain Jack, their comradarie, and the amount of respect they showed to him and each other. Not only is this a captivating tale but it has spiritual concepts in at as well!
Nicely laid out in short chapters so they aren't overwhelmed, and not too many pages, it keeps a good pace going. They're sure to be enticed to read it just from the cool cover! I recommend this to any parent who has a child struggling with interest in books. Try this one. They just might become hooked on reading for life!
*********************************
By Sarah J. Bailey
If I was a boy then this would be a wonderfully, enjoyable book - but because I'm not - I still enjoyed it. This is a short book (I received the e-book version) which will hold the attention of a fast moving boy as well as given them a look into the character's Christian world view. The main characters are three boys who are best friends and enjoy treasure hunting on the beach - but they all learn some valuable lessons along the way - especially some tips from the Bible.
There isn't a lot of good, modern (lots of classics though) books for boys to enjoy that aren't riddled with witches, magic and other sinful behavior, so to read this was a breath of fresh air. There was no violence - although an old sailor did tell a pirate ghost story - but even that was VERY brief and I know my oldest would write it off as fanciful and not to be believed. I'm looking forward to maybe reading this with my son but may need to wait a few more months.
**************************

Sam, Tony and Tyler are best friends.  They are constantly looking for adventure.  Sam receives a metal detector from his dad for his birthday.  He and his friends have heard that people have found a lot of treasure in the area where they live.  They do some research and figure that they can be the ones to find the next great treasure.  If the mention of finding treasure doesn’t peak your interest then let’s throw in an old sea captain.  We all know that boys, and girls, like stories about treasures and old sea captains.  This particular sea captain appears to be hiding something. He hires the boys to help him rebuild his ship.  Along the way the captain teaches them about true treasures.  This is a book that both boys and girls, and parents will enjoy.  I love the gentle message of laying up treasures in Heaven.  All of Max’s books have a Christian theme to them.  The reason I really like them is that I can put them on my shelves at school.  I put them there not only for the Christian students, but also for ALL students.  They are clean cut with great messages.  They have adventures and mysteries to carry the reader from the first sentence to the end of the book.  I would say it is a must read.
- Sandra Stiles **************************
By Charlene L. Amsden "Quilly"
One can tell that Max Elliot Anderson knows the hearts and minds of young boys. The characters, Sam, Tony and Tyler, were typical all-American, adventure-seeking, conclusion-leaping boys full of curiosity and impatience, yet each has his own distinct personality. Bible verses and Bible precepts were embedded in the story without being tract-like or preachy helping the reader learn valuable life lessons right along with Sam, Tony, and Tyler. I highly recommend this book to all adventure-loving (especially pirate-adventure loving) 8 to 11 year old boys or girls.