The Accidental Adventures of Kurt Benson and his friends, Riley and Jordan. 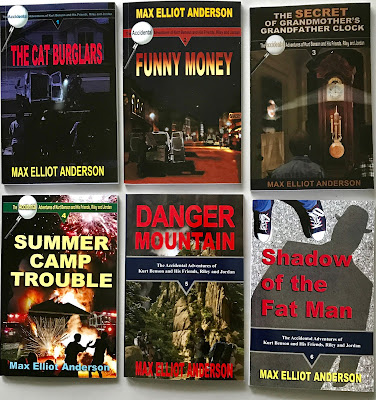 Here's a perfect series for any middle grade reader, 8 - 13, who is looking for fast-paced, exciting adventures and mysteries. They're perfect for summer reading because these books are relatively short - most just over 100 pages. Readers don't get all bogged down with endless details and descriptions. Each story starts out with a bang and doesn't let up until the last page. Even if you have a reluctant boy reader at home, these books are sure to connect because the author also grew up as a struggling, reluctant reader. Yet, avid readers and girls love reading his books, too.

Kurt Benson could hardly believe there had been a burglary, and right in his own neighborhood. He was helping out his friend, Riley Pletcher, whose parents owned Pletcher’s Bed and Biscuit Kennels.
Kurt thought it was odd that his neighbor’s cat, Buffy, had been staying at the kennel while the family was away on vacation. But, when he found out the houses of at least four other Pletcher’s customers had also been hit, his head started spinning.
That was before he saw the copier repairman do something odd. When he thought no one could see him, the man took a sheet of paper from a clipboard on the wall, made a copy, and quickly returned the clipboard to its hook.
Was it possible the repairman had something to do with all those burglaries?
Were they getting ready to strike again?

Can Kurt figure out the mystery in time?

The Mystery of Grandmother’s
Grandfather Clock #3

Why did Kurt risk his own safety to save the life of one of the worst guys at camp? His actions would change Rudy’s life from that point on.

Early into their hike, the boys left the main trail so they could get a glimpse of Danger Mountain. And that’s when they saw some of those same men chasing another man up to the edge of a cliff. A shot rang out, and the man went over the side.

Shadow of the Fat Man #6

Now it’s up to Kurt, Riley, and Jordan, in another accidental adventure, to catch those robbers in the act…but how?

Max Elliot Anderson grew up as a struggling, reluctant reader and has spent most of his life in the production of documentary and dramatic films, client videos, and television commercials. Most of his previous writing includes adventures and mysteries that bring the same visual excitement, and heart-pounding action from those productions into his books for middle grade readers 8 and up.

While producing video programs and commercials for clients, he observed the important role humor played in many different situations. The Sense of Humor is a culmination of those experiences and observations, and is intended to help people understand the power a positive sense of humor offers.

Mr. Anderson is listed in Who’s Who in America and his productions have won multiple Telly Awards. He and his wife Claudia have two children and four grandchildren.
Posted by max at 7:18 PM