A Legacy of Books for Boys 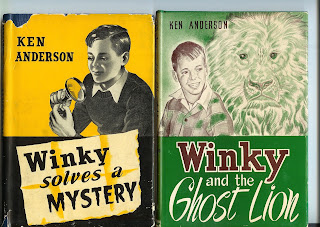 I should have known it.

Even though I grew up as a reluctant reader, my father was the author of over 70 books. Early in his writing career, he also wrote books for boys. Yet I never would have expected that I might start writing action-adventures & mysteries especially for tween boys.

In this picture, you can see two of his early titles. Winky solves a Mystery was published in 1948 by Zondervan, and Winky and the Ghost Lion was published in 1950. My father became my biggest supporter when I began writing in 2001. On the 23rd of this month, he would have been 91, and I really miss him. You can still buy some of the old copies of his books here: http://www.abebooks.com/servlet/SearchResults?an=ken+anderson&sts=t&tn=winky&x=31&y=14

I guess it takes a reluctant reader to understand one. That’s probably why my books are connecting with young readers, as reported by parents, librarians, teachers, grandparents, and the readers themselves. What interests me is that avid boy readers, girls, and even adults like the books I write today.

If you have any questions, just let me know.

This information about your father is fascinating!

I cant wait to get my hands on your books!

I thoroughly enjoy your blog.

What wonderful information about your dad! The covers look interesting, too! Thanks for sharing, and I'm glad you're successful in your own writing endeavors.