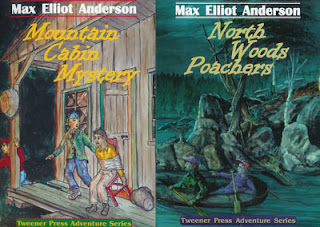 There is a reason why boys love reading books by Max Elliot Anderson. The books are real, telling stories that could easily happen. His books are based on fact, and, in some cases, news accounts.

Such is the case, recently, for two of his published books, NORTH WOODS POACHERS and MOUNTAIN CABIN MYSTERY. The first book is set in a remote area in Northern Canada. It tells the story of international wildlife smugglers, using high-tech methods which earn the thieves millions of dollars.

On June 10, 2007, a published article, by The Associated Press, reports that organized crime syndicates are heavily involved in the illegal poaching and sale of wildlife. The report estimates that this activity accounts for tens of billions of dollars.

Mr. Anderson also wrote the book, MOUNTAIN CABIN MYSTERY. In this story, three boys become separated from their mountain climbing group, in a dense fog. It’s a wild story that becomes even more desperate when the boys stumble upon a terrorist cell, hiding in an abandoned mountain cabin. The boys discover that the terrorists have plans to attack the city of Denver.

Anderson’s stories grab the reader early, and don’t let go until the very end of the book. Readers are unanimous in their responses.

“Anderson does a great job of keeping the action going at a fast pace, probably knowing fully well that the average young reader would rather be working the controls of a video game console than plough through printed text. At the end of each chapter, he typically introduces a twist or an exciting plot turn that makes this a one-sit read.”

“When I finished reading it I wanted to read it again. It's better than Nancy Drew mystery stories. The characters were so real that it seemed as if I was there as an onlooker - not just reading a book.”

“Max Elliot Anderson has woven another great tale of adventure, ingenuity, fun and danger. How the boys solve this mystery, with the ingenious creativity of CJ's technical mind, is both clever and quite believable. This one will keep the reader on the edge of the seat, eagerly turning the next page.”

“Anderson really knows how to put the excitement into his books for kids. This story is so easy to read and so compelling that the kids forget they don't like to read and just keep on turning the pages to find out what happens next.”

“Max Elliot Anderson’s books are destined to become classics along with such greats as Tom Sawyer, The Hardy Boys and Nancy Drew. Anderson is a talented writer; his books should be available in every local and middle school library.”

“In a world of TV and media coverage where violence and crime seem to win the day, Mountain Cabin Mystery is a refreshing, thrilling story that also concentrates on the values that ensure a meaningful and peaceful life – yes, with plenty of mystery and adventure!”

“Three friends, Scott, Al, and Benji, get accepted to a wilderness training camp in the Rockies. But this summertime trip into the mountains to learn outdoor survival skills is only the backdrop to a rollicking adventure that climbs up your spine and hangs by its fingertips from the cliff of your skull.”

If there is a boy in your family, or in your circle of friends, he needs these action-adventures and mysteries.