Workbooks From Books for Boys 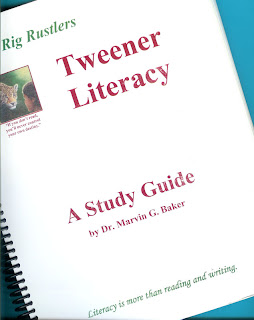 At a recent meeting with my publisher, I was presented with a copy of a companion workbook for one of my action-adventures & mysteries, written especially for boys. Now homeschoolers or teachers in the classroom can combine these exciting stories, that boys and girls love to read, with solid teaching materials.

The study guides have been developed by Dr. Marvin G. Baker, an expert in child education.

Each guide has a teaching section that covers one chapter from my published books. The section contains study questions for each chapter (with answers for the teacher), vocabulary, word-clue matches, a find-the-word puzzle, and a crossword puzzle.

Not only are the stories in each book engaging to young readers, you can take them to the next level with teaching materials that will enhance the learning experience, increasing comprehension. Most chapters end with a cliffhanger, nearly forcing the reader to want to continue reading.

I encourage you to explore these excellent learning tools. If you’d like the contact information for my publisher, for more information, email me at mander8813@aol.com

Now you can have exciting, heart-pounding stories, with teaching material that works…a perfect combination.
Posted by max at 10:42 AM 2 comments:

In 1968 and ’69, it was my privilege to serve my country in the U.S. Army. I know that many of the young men I trained with in basic training went directly into the Vietnam War. Many gave their lives in that conflict. Even though I was drafted for only two years, I was proud to serve.

I hope everyone has a safe Memorial Day, and that we all pay tribute to those who gave the ultimate sacrifice for our country.

You and I are the fortunate ones who now enjoy our freedom, because of those who gave their lives throughout the history of The United States of America.
Posted by max at 8:05 AM 3 comments: 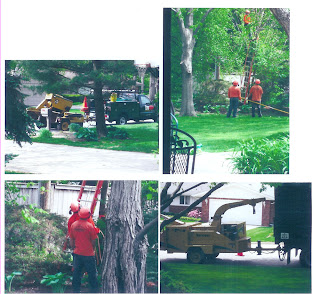 Today we’re having some trees removed from our yard, and I thought that the boys who read this blog might enjoy seeing a few pictures of the work.

The men dress in bright orange so they don’t blend into the trees while they’re up in the branches.

They wear hard hats in case part of a tree might fall on their heads.

They use noisy chainsaws.
The job requires big trucks and heavy equipment. One of the machines eats up the branches and spits them into the back of the truck.
The men wear safety glasses to protect their eyes, and cover their ears to protect their hearing.

There is so much noise out there today that our cat is still hiding in the basement.
Posted by max at 11:50 AM 2 comments: 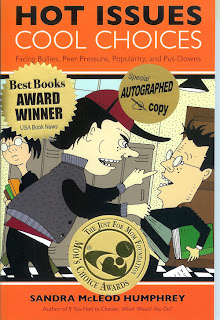 Though some of the stories in this book are a cry for help, the author tells them in a way that is compelling and a call for action.

It is clear to even the casual observer that civility in our culture is in decline. So it stands to reason that this will find its way down to our children and be reflected in their behavior.

My daughter teaches second grade in a public school in Florida, where discipline and respect are some of the most critical issues she faces in the classroom. In her view, what happens at home is what is played out in the classroom as behavioral problems. Aggression and bullying rank near the top. So a book like Hot Issues, Cool Choices, is a welcome tool for teachers and adults who are on the front lines.

This book is a Best Books Award Winner from USA Book News, and received the Mom’s Choice Award from The Just for Mom Foundation. It covers the subjects of peer pressure, bullying, harassment, respect, aggression, humiliation, and more. Be sure to check out the other reviews and endorsements you can find on Amazon.com.

Since my focus is on writing action-adventure & mystery books for boys, that feature character-building issues, and since aggression and bullying are more related to boys’ behavior, I highly recommend this book as a tool for you to use as you interact with the boys in your life.

Max Elliot Anderson
Posted by max at 9:10 AM 1 comment:

Today I'm a guest blogger about books for boys at http://bloggingboutboys.blogspot.com

I hope you'll take a look, and possibly leave a comment. National Children’s Book Week is May 11 – 17. While many will participate in this celebration because of their love of books, I’d like to remind teachers, librarians, and parents to be on the lookout for reluctant readers, especially boys.

As I child, I did a pretty good job of covering up how much I despised reading. Because of this background, I understand the reluctant reader particularly well, and now write action-adventures & mysteries that can reach these children. The following quote, from the mother of two sons, spotlights how my books reach out to and, in many cases, change reluctant boy readers into avid readers.

“I can't believe it .... as the concerned mother of two struggling readers... who is also the daughter of a children's librarian ... I think I have purchased EVERY book recommended for reluctant readers HOWEVER, they have ALL fallen short UNTIL today. We were able to purchase one of your books ... and we're hooked!!! Any way to convince you that we need you to write faster?? I can't thank you enough for your efforts.”

This year, use the National Children’s Book Week to reach out to a reluctant reader. You’ll change his or her life forever.

The following history of Children's book week comes from their official web site at http://www.bookweekonline.com/

"A great nation is a reading nation."

In a small library on a November afternoon in 1921, a stiff-lipped lady was busy with her scissors, shearing off the bottom third of Jessie Willcox Smith's poster for Children's Book Week. A poster showing books scattered in joyous abandon on the floor was more than she could bear to display!

Our attitude toward children and their enjoyment of books has undergone considerable change since that day. The creation and growth of Children's Book Week has both resulted from and influenced this transformation.

Since 1919, Children's Book Week has been celebrated nationally in schools, libraries, bookstores, clubs, private homes-any place where there are children and books. Educators, librarians, booksellers, and families have celebrated children's books and the love of reading with storytelling, parties, author and illustrator appearances, and other book related events.

It all began with the idea that children's books can change lives. In 1913, Franklin K. Matthiews, the librarian of the Boy Scouts of America, began touring the country to promote higher standards in children's books. He proposed creating a Children's Book Week, which would be supported by all interested groups: publishers, booksellers, and librarians.

Mathiews enlisted two important allies: Frederic G. Melcher, the visionary editor of Publishers Weekly (the publishing industry trade journal), and Anne Carroll Moore, the Superintendent of Children's Works at the New York Public Library and a major figure in the library world. With the help of Melcher and Moore, in 1916 the American Booksellers Association and the American Library Association cooperated with the Boy Scouts in sponsoring a Good Book Week.

At the 1919 ABA convention, the Association committed to the organization of an annual Children's Book Week. A few months later, the official approval of the American Library Association was also secured during its first Children's Librarians session.

In 1944, the newly-established Children's Book Council assumed responsibility for administering Children's Book Week. In 2008, Children’s Book Week moved from November to May. At that time, responsibility for Children’s Book Week, including planning official events and creating original materials, was transferred to Every Child a Reader, the philanthropic arm of the children’s publishing industry.

The need for Children’s Book Week today is as essential as it was in 1919, and the task remains the realization of Frederic Melcher’s fundamental declaration: “A great nation is a reading nation.”
Posted by max at 11:32 AM 1 comment: 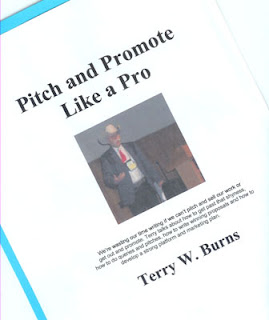 (Special notice for writers who visit my blog)

Disclaimer – Terry Burns of Hartline is my agent.

Recently I finished reading Pitch and Promote Like a Pro, by Terry W. Burns. I can’t possibly over recommend it, especially for new writers. The wisdom and insights contained in this eBook will save you years of mistakes and rejection. Terry pulls back the publishing curtain revealing why most manuscripts and proposals are not acceptable to editors.

Terry shows you how to insure that your manuscript makes it into the 15% – 20% that are actually considered for publishing.

I strongly encourage any serious, unpublished writer to purchase this eBook. You can do that at http://www.terryburns.net/

Max Elliot Anderson
Posted by max at 2:55 PM No comments: 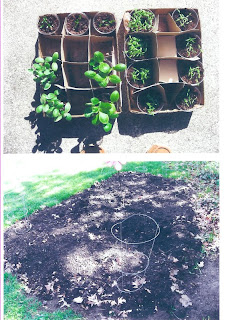 Is your family planning a garden this year? We haven’t had one for some time, but this spring I’ve prepared a small plot for tomatoes, summer squash, cucumbers, and green peppers. The seeds were planted indoors in April. If you’re too late for that, you can always buy a few plants at the greenhouse.

As I prepared the ground, I thought back to the endless hours I spent as a boy, crawling around in the dirt and playing in my back yard.

What boy do you know who doesn’t enjoy digging around in the dirt with his hands? They don’t even need an excuse, but if you give them one, all the better. Boys can get into the gardening process with you, and then take personal pride in seeing the vegetables appear a few weeks later.

Of course, it helps if the like vegetables too.

If you haven’t started a garden yet, I hope you’ll give it a try. And you can save money in the process.

So, what are your garden plans this summer?
Posted by max at 10:11 AM 4 comments: 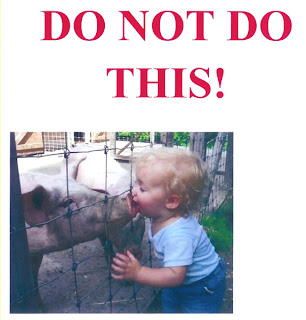