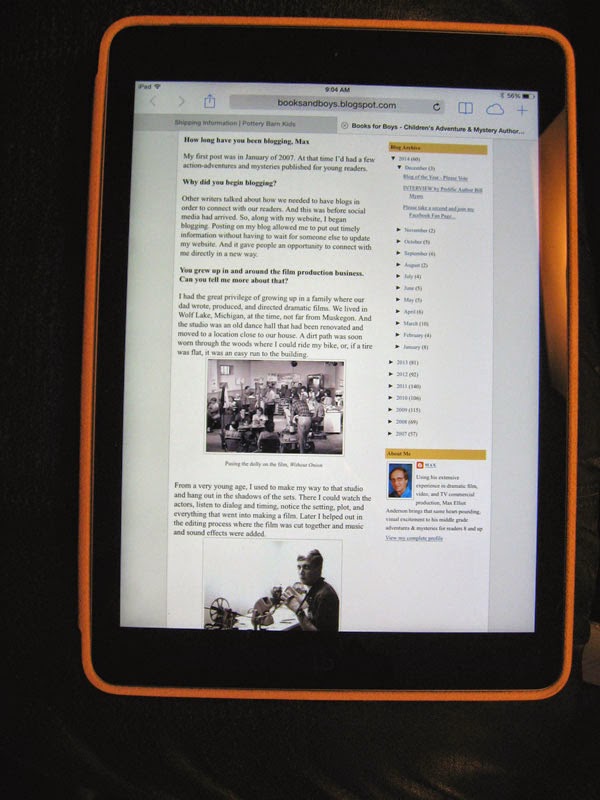 Get ready to order e-Books for the e-Readers you're giving young readers this Christmas. I hope you add these mysteries and adventures. 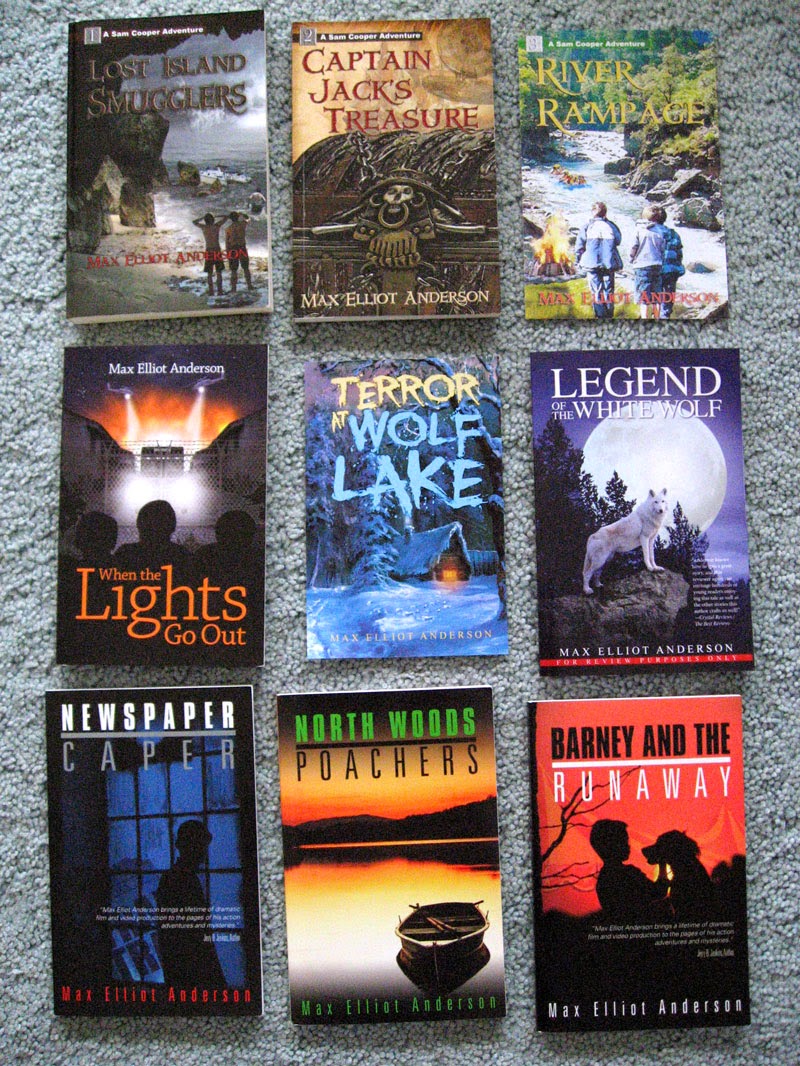 Blog of the Year - Please Vote

Please VOTE - My middle grade adventure & mystery book bolg is up for blog of the year at Book Fun Magazine. Look in the right margin and scroll down to my name and picture. http://www.bookfun.org/group/book-fun-magazine

Book Fun Magazine
Magazine centered around Reading Groups, giveaways, stories and testimonies. Launches in September. This group is for suggestions and comments for the magazine…
BOOKFUN.ORG
Posted by max at 1:15 PM No comments:

This interview originally appeared in Book Fun Magazine
﻿
How long have you been blogging, Max


My first post was in January of 2007. At that time I’d had a few action-adventures and mysteries published for young readers.


Why did you begin blogging?


Other writers talked about how we needed to have blogs in order to connect with our readers. And this was before social media had arrived. So, along with my website, I began blogging. Posting on my blog allowed me to put out timely information without having to wait for someone else to update my website. And it gave people an opportunity to connect with me directly in a new way.


You grew up in and around the film production business. Can you tell me more about that?


I had the great privilege of growing up in a family where our dad wrote, produced, and directed dramatic films. We lived in Wolf Lake, Michigan, at the time, not far from Muskegon. And the studio was an old dance hall that had been renovated and moved to a location close to our house. A dirt path was soon worn through the woods where I could ride my bike, or, if a tire was flat, it was an easy run to the building. 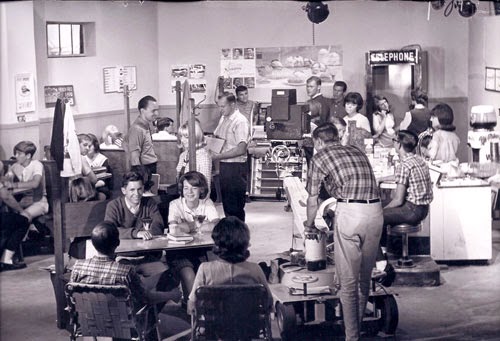 Pusing the dolly on the film, Without Onion
From a very young age, I used to make my way to that studio and hang out in the shadows of the sets. There I could watch the actors, listen to dialog and timing, notice the setting, plot, and everything that went into making a film. Later I helped out in the editing process where the film was cut together and music and sound effects were added. 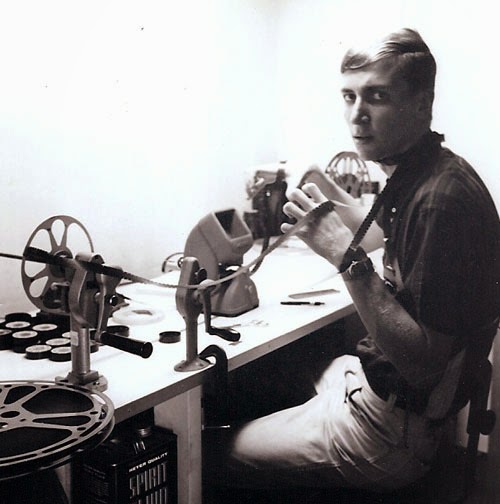 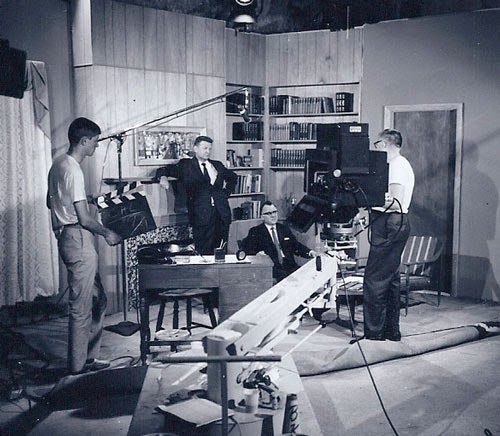 Working on another film production
At the age of eight, I was “struck and killed” by a hit-and-run driver. But…since the film I was in was shot in black and white, the blood that ran from my nose, mouth, and ear, came out of a chocolate syrup bottle.


Later I sat with audiences and watched some of the finished films. It was amazing to hear them laugh in just the right spots, and cry when the story turned sad. Because of those experiences I knew, from a very early age, that I wanted to work on films, too.


Has your film and video experience helped in writing action adventures and Mysteries for middle grade readers? 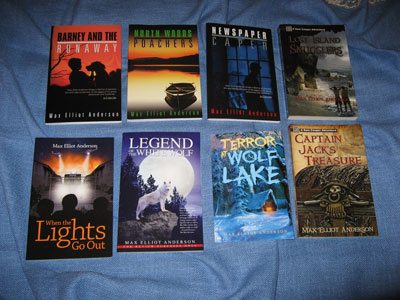 The 10 books currently published
I believe those early experiences have everything to do with how I write today. My professional life included the production of films, video programs, and television commercials for over forty years. In that time, I was responsible for bringing all kinds of stories to the screen. In the process, and without my knowing it, I’d been storing countless impressions, in my subconscious, that would surface later as I began writing.


I don’t write to an outline. I do have the beginning, middle, and end in mind when I start, along with who the main character is and what challenges he’ll be facing. From there the story emerges in front of me as I write. And writing it feels like I’m watching a feature film appear right before my eyes. Sometimes I’ll close my eyes just to look at the setting and observe the characters in a scene. 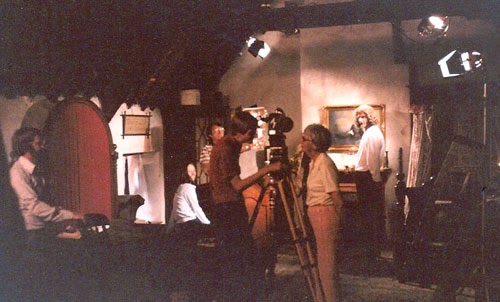 Borrowing a page from my filmmaking days, I like to have props and pictures around the computer that suggest elements in the story I’m writing. In addition, I’ll play mood appropriate music and even sound effects to help set the tone. I prefer to write summer stories when it’s hot outside and winter stories when the air is freezing. Then, all I have to do is step outside to get in the proper mood.


What is the focus of your blog?


At first I thought I should write to kids, but there were some problems with doing that. Parents can be pretty cautious when it comes to turning young children loose on the Internet, and I completely agree with them. I realized early that, to get good books into the hands of kids, I needed to speak to parents, grandparents, and other adults in their lives. So that’s what I’ve been doing over the last several years. My blog subjects range from personal experiences, production trips and locations, important articles by others, and book introductions for other middle grade authors. Anytime I have an article in magazines like Book Fun, or others, I post information about that along with a link. And each time I have a new release, it gets a lot of attention on my blog.


Later I go back and do other promotion for books of mine that have been out for a time. But in everything that I put on my blog, the focus is on getting kids, especially boys, to read. After all, where do we expect to find our adult readers of the future if we aren’t grooming them when they’re young?


Why did you choose to focus on books for boys?


My writing began in late 2001. At that time, there seemed to be plenty of material available for girls, but not so much for boys. In addition, I grew up hating to read, even though my dad was an author of over 70 books. I felt there had to be lots of boys out there who didn’t like to read. We’d rather be doing things, or seeing how they work; not reading about them in books. I thought if I could write the kinds of books I would have enjoyed as a boy, maybe other boys and girls would like reading them, too, and that’s exactly what I’ve found. What’s been fun is to hear from kids, and their parent, how reading one of my books is like being in an exciting movie. It kind of makes all my other work experiences come full circle. 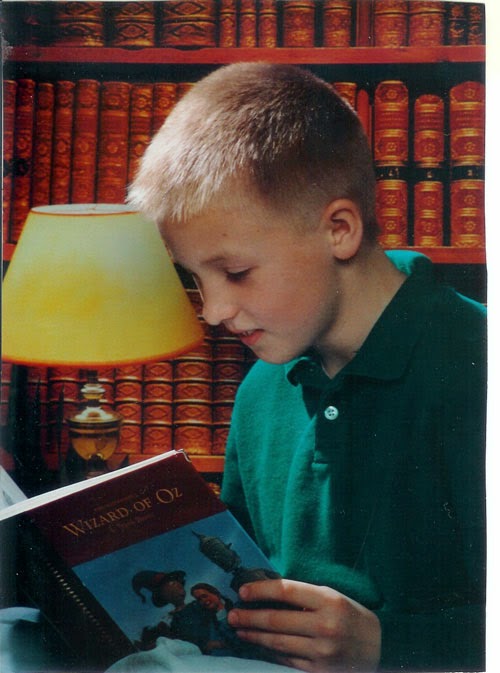 Who should be reading your blog?


The information on my blog would be helpful to teachers, librarians, parents, grandparents, children’s workers, tutors, and kids. Over the course of a year, there’ll be something for everyone. Most importantly, if anyone knows of a reluctant reader, like I was, they should be checking out my blog, too.


Do you plan to continue with your blog?


Yes. The fact that it came in 2nd at Book Fun Magazine last year indicates that people are interested in good reading material for kids. Hopefully, through this award, more and more people will become aware of my Books for Boys blog http://booksandboys.blogspot.com My new releases are launched on the blog along with video trailers for these books http://www.youtube.com/user/Maxbooks100?feature=watch


What are some of the subjects you've covered in your blog?


We’ve talked about bullying, reluctant readers, other authors, current events, issues related to education, and more. It’s a good place to keep connected with what’s important to kids and reading.


What do you hope is the take-away for readers of your blog?


I view my blog as a conversation. Parents especially can get to know the heart of an author who is attempting to reach out to children. I’m the dad to two grown children and now have two little granddaughters. So I know some of the pressures and issues related to raising children. We need to understand that reading is probably the most important skill that will predict the success of a child in school and later in life. Anyone coming to my blog will get that. But there are also helpful suggestions, links to important articles and sites, along with information on my new releases. An education company in Canada has contracted six books, and the serialized story concept that is emerging through Book Fun Magazine, and Elk Lake Publishing, should keep my blog pretty active.


What's ahead for your writing?


There are a number of things I’d like to write, but I don’t want to get into that just now. And since I wrote thirty-six middle grade manuscripts, almost non-stop over a period of three years, there are still several of those that need to find publishing homes. I find most of my time is spent in marketing, promotion, and writing a regular, monthly column. In addition, I’ll be continuing an ongoing series with Elk Lake Publishing in the months ahead. It’s called, "The Accidental Adventures of Kurt Benson and his friends, Riley and Jordan." The first story, The Cat Burglars, will be starting soon, is in six parts, and will be delivered primarily to electronic reading devices. The next story, with the same characters, is Funny Money Mystery. So be sure to watch for information on these in Book Fun Magazine.


Thank you for taking time to do this interview.
I enjoyed it, Bill. Nice to connect with you again.

FollowingMessage
More options
Posted by max at 8:53 AM No comments: