Why I Write Tween Books For Boys 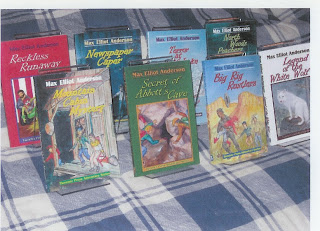 It is clear that some of the most critical patterns for a lifetime are decided during the tween years. This is that awkward time between still trying to be a “little kid” and being all grown up.

As a child, I grew up as a reluctant reader. In a family of seven children, I wasn’t especially pushed to read, so I never formed good reading habits. This was ironic because my father has published over 70 books. A number of these were written for children.

A few years ago I decided to look into some of the reasons for my lack of interest in reading. My findings lead me to begin writing chapter adventure books, for readers 8 - 13, that I would have liked as a child. My books are highly visual, with lots of humor, dialog, and plenty of heart-pounding action. Early responses from children indicate that I’m right on target. Reluctant and avid readers now devour each new title as it is released. Parents are also vocal in their appreciation for books that are reaching their children.

Marketing executives will tell you to find a need and fill it. But this isn’t exactly the way I got started. How that came about is a story in itself. My purpose was to craft books that would excite the interest of reluctant readers.

After a detailed study into why I didn’t like to read, and looking at books that were written for children, I set out to write the kind of stories I would have read when I was a child.

A further target audience I wanted to write for was boys who might be without a positive male role model in their lives. I felt that if I could tell a good story, the moral, ethical, responsibility elements could then be planted in their minds. Hopefully, at some time in the future, those concepts would be useful when these boys became men. I have a degree in psychology and this helps in communicating these concepts, and understanding my audience.

The biggest surprise, outside of the fact that reluctant reader boys love these books, is that avid boy readers, girls, and even adults do too. I believe it’s our responsibility to do everything we can for the next generation, to leave this world a better place than when we found it. I hope my books will have a small part in that process.

The first seven books are NEWSPAPER CAPER, TERROR AT WOLF LAKE, NORTH WOODS POACHERS, MOUNTAIN CABIN MYSTERY, BIG RIG RUSTLERS, THE SECRET OF ABBOTT’S CAVE, and LEGEND OF THE WHITE WOLF. But this is not a “series” in the traditional sense. Each book takes place in a different part of the country with different characters, setting, and plot. Readers and reviewers have likened my books to The Hardy Boys, modern day Tom Sawyer & Huck Finn, Nancy Drew, Star Wars, Tom Swift and Scooby-Doo, Lemony Snicket, and adventure author Jack London.

When I first began writing, I decided that if I could help one reluctant tween to become a reader, it would be worth it. From the emails and letters I have already received, that goal has been reached many times over. I received the following email right after Christmas. It underscores the effect that my books are already having on tweeners.

“I gave my son (11) a couple of your books for Christmas (he read "Northwoods Poachers" when you asked for some "reviews" and loved it). He is definitely a reluctant reader...I have to be on his case constantly to get him to read. When he opened the package I could tell he was not too thrilled with getting books...until he saw that you wrote them. ‘Oh, these are THAT guys books...thanks, Mom!’ Later in the day I mentioned to him that I expected him to read the books. He said ‘You don't have to tell me that, Mom...I want to read them!’ As a mom who is almost never without a book in her hand, it really warmed my heart to see him excited about reading! Thanks, Max! And please, keep them coming!”

My books are distributed nationally to bookstores by Baker & Taylor, and are

available online at Amazon.com. Each book has been ranked by Accelerated Reader.

Max Elliot Anderson grew up as a reluctant reader. After surveying the market, he sense the need for action-adventures and mysteries for readers 8 – 13, especially boys.

Using his extensive experience in the production of motion pictures, videos, and television commercials, Mr. Anderson brings the same visual excitement and heart-pounding action to his stories. Each book has completely different characters, setting, and plot.

Seven books are published, with an additional twenty-seven manuscripts completed. Young readers have reported that reading one of his books is like being in an exciting or scary movie.

Additional information can be found at http://mailto:mander8813@aol.com,
nearly 50 pages of reviews http://maxbookreviews.blogspot.com/,
and Books for Boys blog http://booksandboys.blogspot.com/
Posted by max at 7:32 AM 2 comments:

Children’s Literature Conference focuses on what boys like to read, books for boys

This Friday and Saturday, March 14 and 15, there will be a gathering of educators and librarians that interests me.

Children’s Literature Conference focuses on what boys like to read, books for boys

If you’re interested in books for boys, then the above link will offer encouragement.

From the very beginning, I began writing my action-adventure & mystery books for boys, because I grew up hating to read, and not many books could reach me as a reluctant reader.

I’m encouraged by this conference at Northern Illinois University, focusing on books for boys, and look forward to an increased awareness of the critical need to publish more books for boys that boys want to read. 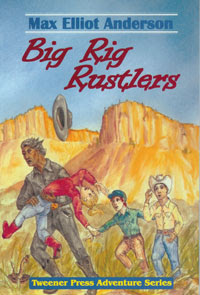 Most of my books are based on something that could happen, has happened, or is happening today.

BIG RIG RUSTLERS is an example, where I had read about cattle rustlers who use satellite radios, off-road vehicles, and eighteen-wheeler semi trucks to steal cattle.

Here’s a story about rustlers who are stealing fewer cattle at a time today, using smaller vehicles.

50 Pages of Reviews including BIG RIG RUSTLERShttp://maxbookreviews.blogspot.com/
Posted by max at 3:11 PM 1 comment: 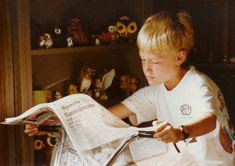 Actually...it's National Reading Month, and there is no better time to introduce young readers to the action-adventures & mysteries by Max Elliot Anderson, that kids love to read. All are ranked by Accelerated Reader.