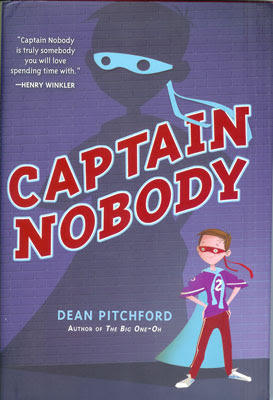 What a fun book!

Growing up in the shadow of his football-star brother, Chris, Newt Newman never felt particularly special or even noticed in his own family. When Newt’s brother is knocked into a coma during the biggest football game of the season, he is lost again in the whirlwind of concern about his sibling. With his parents otherwise focused on his older brother, Newt’s two best friends decide that celebrating Halloween is the best prescription to get his mind off the accident. By chance, they turn some of his brother’s old clothes into Newt’s best costume ever and an unexpected new identity—Captain Nobody, defender of the little guy.

When Newt dons this makeshift outfit—a tribute to his brother—he begins to feel confident and empowered. Newt decides to wear his costume past Halloween which leads his new alter ego into a series of events fostering his newfound hero status. But will Captain Nobody be able to save the one person Newt cares about most?

With CAPTAIN NOBODY, Dean Pitchford has assembled a lovable and quirky cast of characters with a perfect blend of adventure, humor and family drama. The book is for anyone who's ever felt like the "little guy" and will ultimately be inspired by an unlikely champion. CAPTAIN NOBODY is an ideal summer read for young boys in the middle-grade set.

About Dean Pitchford
Dean Pitchford, author of The Big One-Oh, starred on Broadway in Pippin and Godspell before turning to songwriting and screenwriting. His multi-million-selling songs include the Oscar-winning “Fame,” “Footloose,” “Holding Out for a Hero” and “After All.” He has been nominated for four Academy Awards, five Grammys and two Tony Awards. His stage musical adaptations of Footloose played over 700 performances on Broadway and is now being produced around the world. Pitchford, who was born in Honolulu currently lives in Los Angeles.

Readers will enjoy watching this Everyboy protagonist cast off his customary timidity…
(as) he seems to magically grow into the heroic role.
--Booklist

“…a cliffhanger! This novel will speak to those kids who feel left out…
the humor and compassion are sure to appeal to reluctant readers.”
--Kirkus Review

“Captain Nobody is truly somebody you will love spending time with.”
--Henry Winkler, author of the Hank Zipzer series

This sounds like a fun book. Fascinating to read about the backgrounds of childrens writers. Thanks for telling us about the book and the author.