I want to make sure you are aware of a new book, When The Lights Go Out. This is an adventure / mystery for readers 8 - 13 with a terrorist plot.
In the story, the father of the main character is able to tell his kids why he joined the army instead of going into business. He says, "After what happened on 9/11, somebody had to help keep the country safe." This opens a short discussion with his two children in which he briefly recounts the events of that day.


I found, while speaking in schools, that many children today know little or nothing about 9/11 or why it's important to them. When The Lights Go Out will help teachers, librarians, grandparents, and parents with this issue.


There is a special web page for When The Lights Go Out with lots of information, a video, and a news release. You are welcome to lift any material that might help you in communicating with your circle of influence.
http://max-whenlightsgoout.blogspot.com 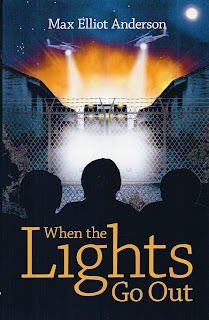 I remember being disgusted that morning that the lead story on the news was whether or not Michael Jordan would make a comeback in basketball. "Isn't there anything more significant going on in the world," I thought. An hour later I would have been happy if basketball were the most important news of the day.