Please consider forwarding the link for this release to young readers, teachers, librarians, your associates, family, or circle of friends.

Rockford, IL - Author Max Elliot Anderson announces the release of six new standalone adventures and mysteries, from the Book Club Network, for middle grade readers. They include the following titles:

“Whispers in the Graveyard” - Josh and his friends discovered a gigantic drug smuggling ring, late one night in the cemetery, and now the boys find themselves right in the middle of it.

“Troubles At Timber Ski Lodge” - The Baxter family moved to the lodge two years ago. Unfortunately, it hadn’t snowed enough in those two years for the lodge to turn a profit.
An avalanche, sibling rivalry, a neighborhood bully, and being chased by gold thieves only add to Eric’s troubles.

“Last Chance” - Derek Snyder is about to begin his last year of middle school. But he hadn’t counted on the new kid, Chip, showing up. Readers will learn what is truly important as they witness a person willing to give up his life for a friend.

“Shadow” - This is a classic boy-and-his-dog story. A rash of vandalism struck the town and Bobby discovers who’s behind it. After Shadow saves Bobby’s life, he puts his own in jeopardy.

“Snake Island” - On the night of their campout, someone came to the island, dug a hole, and rolled a large piece of carpet in. Rod and his friends reported what they saw and Mr. Patterson was accused of a serious crime. But did he do it? And what exactly did he bury in that hole?

“Scanners” - A lot of money was missing from the grocery store where Alex and his friends worked for the summer. He was sure he knew who was guilty. Now Alex had to come up with a plan to catch him. But he wasn’t prepared for what happened next.

Readers and reviewers agree. “Written in the manner of a good, old-fashioned Hardy Boys - style mystery,” writes Liz Duckworth in CBA Marketplace. Reviewer Heather Hunt wrote, “This is Tom Sawyer and Huck Finn if they lived in modern American suburbia.”

And author Jerry B. Jenkins says, "Max Elliot Anderson brings a lifetime of dramatic film and video production to the pages of his action adventures and mysteries."

Young readers report, “Reading one of Anderson’s books is like being in an exciting movie.”

Additional information about Max Elliot Anderson can be found on his middle grade adventures and mystery blog:  https://middlegradeadventureandmystery.blogspot.com His new books are available on Amazon, and distributed through Ingram and Spring Arbor. 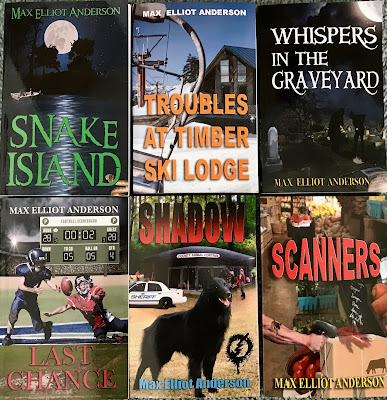