Why count sheep when you can read about their adventures? 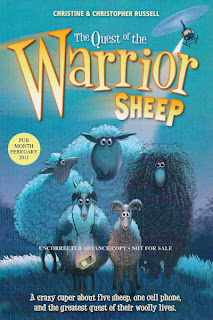 A silver object falls mysteriously from the sky and lands on Sal, a matronly Southdown ewe who lives happily with her sheep friends on Eppingham Farm. The sheep are convinced that an ancient ovine prophecy is being fulfilled. They must go North (so to Scotland, perhaps?), on a mission to aid Lord Aries, Sheep of all Sheepdom, Ram of Rams, in his battle against the powers of darkness in the shape of Lambad the Bad. Thus the Eppingham Posse of Rare Breed Warriors is born. In fact, the silver object is a mobile phone, dropped from a hot air balloon by Luke and Neil, who have been stealing bank money over the Internet. They need that phone back to hide the evidence. And a couple of woolbags aren't going to stand in their way! The chase is on...

After reading this book, you'll never look at sheep in the same way again.

"I loved this book from the first chapter to the last." -John Lloyd, The Bookbag
"Hilarious crime caper involving a gang of sheep and a mobile phone...what more could you ask for?" -Books Monthly


"...The most unlikely of all epic adventure novels you will ever come across." -James, Kid's Compass

Christopher Russell was a mail man when he had his first radio play broadcast in 1975, having given up a job in the civil service to do shift work and have more daytime hours for writing. Since 1980, he has been a full-time television and radio script writer, and, more recently a children's novelist. His wife Christine has always been closely involved with his work, storylining and script editing, and has television credits of her own. High Hooves is the first book they have written together. --This text refers to an out of print or unavailable edition of this title.

I received an uncorrected advance copy from the publisher for this post
Posted by max at 12:55 PM