Robins in the Spring

This bush sits outside a large picture window in our living room on the front of the house.﻿ 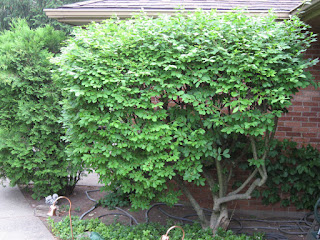 I began to notice a robin that was always around and took off yelling anytime we came out the front door. 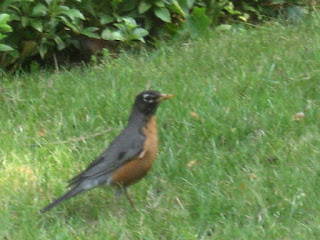 As I suspected, a nest had to be nearby, and here it is, in that bush, with 3 eggs inside. Each time we walked outside, the mother flew away, squawking, trying to divert our attention away from the nest, but I'd already discovered its location. 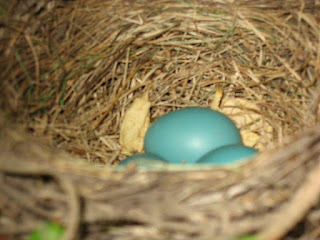 In time she accepted the fat that we were going to keep coming and going through that front door. She settled into our routine and didn't fly away as often. 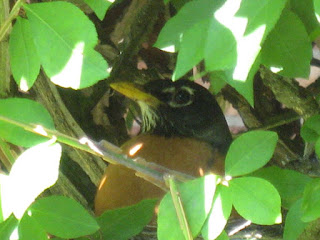 Soon the babies hatched as you can see here. 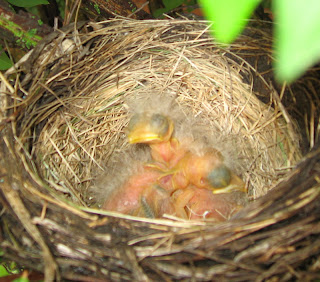 They began screeching as they called out to their mother for, "More food! More food NOW!" 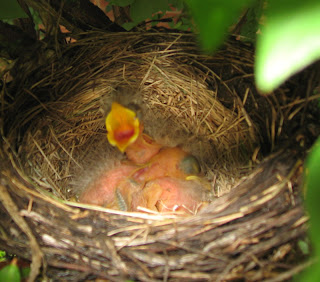 Here they seem to be practicing for their part in the local robin opera. 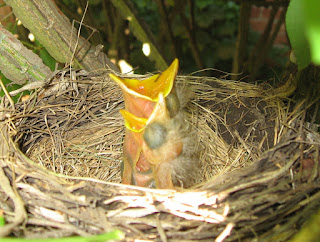 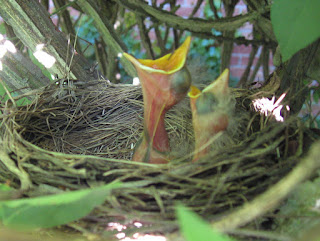 In a few days, however, it appeared that only one baby robin remained in the nest. I didn't watch it every day, so I have no idea what happened. The only thing is, I felt from the start that the nest was smaller than a usual robin's. However, this guy was the Baby Huey of the family and he may have simply pushed the others out. What's that they say about survival of the fittest? 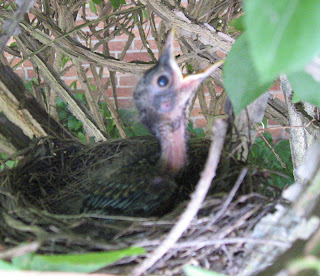 He kept demanding all the food and from this point, that's what he got since the others were gone. 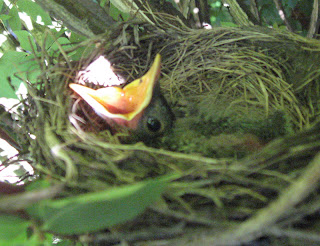 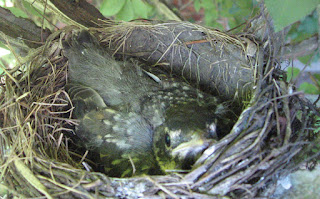 ...this morning when he left the nest and sat in the branches of the bush. By this evening he was gone. 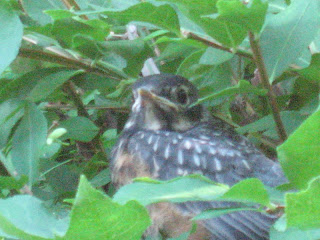 cyVery good Max. This is similular to my experience with a small yellow bird. I don't know the spieces, but she looks like someone set a pet Canary loose for the summer. Raspberry bushes grow thick beneath our bedroom window, and one day while watering the plants,I discovered this nest. I peeked inside and there are four, maybe five, little white egges. The parent birds weren't anywhere in sight, or at least not where I could see them. I left the nest alone and quietly left the area. Maybe I will have the adventure of watching mama and papa Canaaty raise some young in the near future.

I wonder if they might be yellow finch? That's one of my favorites. Here's a link with pictures
http://images.search.yahoo.com/search/images?_adv_prop=image&fr=yfp-t-701-s&sz=all&va=yellow+finch