Recently I entered a letter writing contest about the importance of reading in America. Two letters were chosen from each state, and mine was one of them for Illinois. The prize was a signed copy of President George H. W. Bush's book and a pair of "crazy" socks - he likes those. 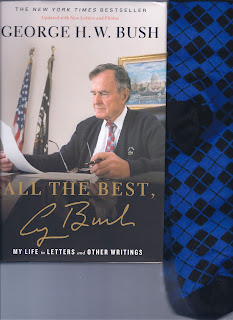 But I found his signature to be the most special. That's because the president has been in failing health recently.  You see, my dad had Alzheimer's, and toward the end of his life, it became very difficult for him to sign his books. Still he did the best he could. 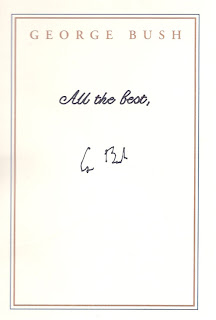 
The Barbara Bush Foundation for Family Literacy announced the winners in a national letter writing contest, highlighting the beneficial connection between reading and writing abilities. Two letters from each state were selected. Max Elliot Anderson, of Rockford, Illinois, is one of the winners for the State of Illinois.
The "Devotedly, Dad" contest was open to America's dads and granddads to encourage a love of literacy in their own families. Winners will receive a copy of All the Best, My Life in Letters and Other Writings, personally signed by President George H.W. Bush, plus a pair of his favorite and fun First Family socks. "The art of letter writing certainly hasn't been lost on my dad. For decades, he has been a prolific writer, penning notes, letters and emails to his colleagues, friends and family," said Jeb Bush, Foundation co-chair. "Of course, the personal letters written to my brothers, sister and me happen to be my favorite…always signed…Devotedly, Dad"

The contest coincides with the release of President George H.W. Bush's new edition of All the Best, My Life in Letters and Other Writings, which includes 100 additional pages of photos, diary entries and letters.
Max Elliot Anderson is the author of nearly 20 action-adventures and mysteries for readers 8 – 12. He grew up hating to read and now writes the kinds of books he would have enjoyed as a boy. http://www.amazon.com/Max-Elliot-Anderson/e/B002BLP3EE


The Barbara Bush Foundation for Family Literacy was established in 1989 by former First Lady Barbara Bush. The Foundation supports the growth of family literacy programs across the country, having invested more than $50 million across all 50 states. As a public charity committed to 100% literacy, the Foundation fulfills its mission through support of programs that allow parents and children to learn together. For more information about family literacy visit the Foundation's web site at www.barbarabushfoundation.com
Posted by max at 9:39 AM

This is so cool, Max! Congratulations!

What an honor. And what an honor you bestow in return by noting that hard-won signature.