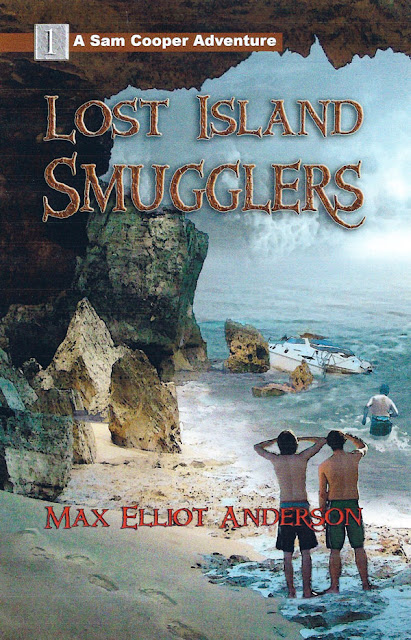 
Sam Cooper had only recently moved to Florida when he met Tony at his new church. Tony’s father owned a marina.


Sam, Tony, and Tyler took scuba lessons together. Tony got them in for free. After they completed the course, the boys decided to try out their new skills in the real world…the ocean. The only problem was, none of them had permission.


While Tony’s father was away on a buying trip, the boys took one of the rental sailboats out for their diving adventure. Everything went well until the biggest storm Tony had ever seen, blew up from out of nowhere. Their boat was smashed to splinters and the boys found themselves stranded on Lost Island.


But, if they thought the worst had happened, they were wrong. The boys discovered a secret hideout that was used by drug runners in high powered speedboats.


Sam and his friends had to find a way to stop them, but how? And, even if they could, what were they going to tell their parents when they got home?
Direct Kindle link -  Excellent reviews there, too.
http://www.amazon.com/ISLAND-SMUGGLERS-Cooper-Adventure-ebook/dp/B004VT3HOC/ref=sr_1_1?ie=UTF8&m=AG56TWVU5XWC2&s=digital-text&qid=1303227422&sr=1-1

Flash! Just received this email.
Hey Max, I just finished the book and really enjoyed it. Kind of took me back to my younger days when every day seemed to be an adventure, especially boat adventures. My grandson, who turns four on Sunday, will probably enjoy your books in a few short years. He and his parents are over in Germany at the moment where his dad is serving in the Army. Anyway, I'm looking forward to the next book that comes out in Kindle format. Thanks for the entertainment.
Posted by max at 12:15 PM