Do We Need More Good Books for Boys?

(Note – You are welcome to use this article on your web site, blog, in a newsletter, in print, electronically, or in any way you choose. You may also use photographs from this blog or contact me at mander8813@aol.com  if you need anything.)


Do We Need More Good Books for Boys?
By
Max Elliot Anderson


“We need more good books for boys.” That’s something I’ve heard for a number of years from parents, teachers, librarians, grandparents, publishing sources, and others. The first time I heard those words was back in 2001 when I set out to write for kids. After surveying the market, I chose to start writing action-adventures and mysteries for readers 8 – 13, especially boys. How did I arrive at this segment of readers?


I grew up hating to read. My father was the author of over 70 books during his lifetime, but I didn’t read any of them. I decided, instead, to follow a career of film and video production. Through this field I learned some valuable lessons. Much of my work included the production of dramatic films that were rented for children. This was back when schools and churches had their own 16mm motion picture projectors and movie screens. Video and online material has since replaced that antiquated system.


The most important thing I learned was that girls would watch a boy’s story while boys were not interested in films in which a girl was the main character. Fast forward to my market survey. What I found were plenty of books for girls, or about girls, but not so many for boys.


Using the same template I learned from the film business, I began writing books that I knew boys could relate to, because they were the kinds of stories I would have enjoyed as a boy. The good news is I found that girls enjoyed the stories just as much as boys did.


At a recent bookseller convention, in Atlanta, one of my publishers invited me to appear in their booth to sign copies of my latest adventure for kids. As each person approached, I said hello, asked about them, and then said, “I write adventures and mysteries for readers 8 – 13, especially boys.” Without exception, a look of surprise spread across each face, followed by some variation of, “Good! That’s what we need, more good books for boys.”


From a number of online sources I encounter the same cry.


Over the space of a few years, I did nothing but write story after story until thirty-six manuscripts were completed. In the beginning, I didn’t have a publisher. I didn’t have an agent. What I did have was the desire to create the kind of material that would have interested me when I was younger. And for those who have discovered my books, that plan seems to be working.


Parents of young readers, teachers, and the kids themselves, began to write back to tell me how much they enjoyed a particular book. But the greatest responses have been those where young readers said that reading one of my books is like being in an exciting or scary movie. Given my film background, that’s one of my favorite things to hear.


While it’s true that my books are slanted toward boys, that’s not to say that girls are excluded. In some of the stories, girls are also a part of the plots. I just felt it was important to address the growing problem of struggling or reluctant readers. In the vast majority of cases, those are boys.


But I discovered something else after a few of my books were published. Not only did boys appreciate them, and girls, I also started hearing from lots of adults. In some cases, a dad has picked up a copy and it turned out to be the first book he’d ever read from cover to cover. And avid readers enjoy them as much anybody else. Again, I attribute that to the fact that I bring the same excitement and heart-pounding action from my film production experience to the pages of these books. One reviewer even said it was like reading a movie script. I don’t know if that was intended to be positive or not, but the fact is, readers have a difficult time putting one of these books down until they finish.


My writing approach is a little different in a few key areas. I keep descriptions and details to a minimum. Readers won’t find large, intimidating blocks of words which ordinarily make it difficult to find your place at times. The stories are fast-paced, exciting, using shorter sentences, and lots of humor and dialog.


These books are published now.


These books are in production now.


We know that reading has been on the decline primarily because of other distractions including video games, computers, television, smart phones, and other activities. Yet, we also know that there are processes that take place in the brain which can only happen while reading. When I speak in schools, I often begin by saying, “Something has been stolen from you, and you don’t even know it.” Students become wide-eyed as they try to figure out what it is. That’s when I tell them, “It’s your imagination.” This is because in the electronic world, everything is already packaged and presented so that kids don’t have to use an imagination.


We’re in real danger of losing the battle with many of our children. If you’re having difficulty in getting children in your family, school, or circle of friends interested in reading, try one of the books listed above. Maybe your kids will also say that it was like being in an exciting movie when they finish reading. And remember, readers are the leaders others follow. 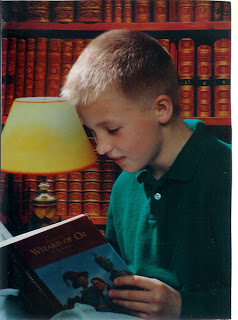 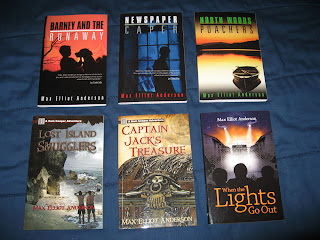 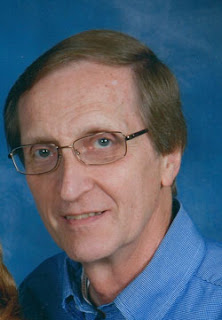 Author Max Elliot Anderson
Biography - Max Elliot Anderson grew up as a struggling, reluctant reader. Using his extensive experience in the production of motion pictures, videos, and television commercials, he brings the same visual excitement and heart-pounding action to his adventure and mystery stories, written especially for boys. Both boys and girls have reported that reading one of his books is like being in an exciting movie.
﻿
Posted by max at 7:38 AM

I tend to write male characters but I'm not able to write books aimed toward boys (the only book I've written that's actually very good is the exact opposite; a romance novel! LOL). God bless your work!

Great article, Max. We also need to get through to children that their imaginations are being manipulated by adults when they prefer to watch the film rather than read the book. Yes, it's sadly true that boys tend to steer clear of books featuring girls, and often they won't read books written by a woman, which is why Joanne Rowling (the name by which I first heard of her) became J K Rowling. And notice she chose a boy as her protagonist? Women writers often do; I'm guilty of it myself. I would hazard a guess there are many men who read only books written by men. I'm still trying to think of one book my husband has read that was written by a woman!
Keep up the good work.

Thank you Julie. Same to you.