Note From the Publisher: I've given this collection a PG or PG13 rating for some of the "cowboy language. " 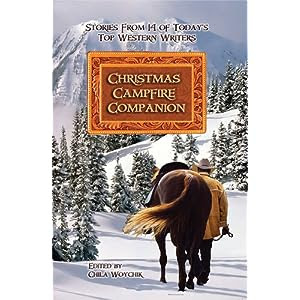 My friend, and agent, Terry Burns, assembled an excellent group of writers, and Port Yonder Press has produced a great new book I wanted you to know about.


﻿Christmas Campfire Companion
"Fourteen of America's top western writers publishing today have contributed delightful Christmas stories to this collection, fourteen saddle-hardened writers who reached down to give a glimpse of their sensitive side. Each story is a gift, and each a take on Christmas . . . a western Christmas. I'm honored to have a small part in it." Terry Burns


Troy D. Smith has published eight books and more than fifty short stories and magazine articles and was a 2001 winner of the Spur Award, the western writer's equivalent of the academy award.


Frank Roderus is a well-published author of over 300 books, twice received the most prestigious award
a western writer can receive, the Spur Award.


Tim Champlin (pseudonym of John Michael Champlin) is the author of 30 historical novels over the past 30 years as well as 35 short stories and non-fiction articles.


Larry D. Sweazy won the WWA Spur award for Best Short Fiction in 2005, and was nominated for a Derringer award in 2007 and has published over 50 non-fiction articles and short stories.

Robert Vaughan sold his first book when he was 19 years old, and, under his own name and several pseudonyms, he has sold more than 400 books, including approximately 200 Westerns. He has hit the NY Times, Publishers’ Weekly, and USA Today bestseller lists numerous times, and is the recipient of the Spur Award (SURVIVAL, writing as K.C. McKenna).


Douglas Hirt won the Colorado Authors’ League Top Hand Award. His 1998 book, BRANDISH, and 1999 DEADWOOD, were finalists for the SPUR award given by the Western Writers of America.He is short story writer, and the author of thirty-two novels and one book of nonfiction.


Dusty Richards is the author of a hundred western novels under his name and pseudonyms. He’s won two Spur Awards, one for a novel called “The Horse Creek Incident” and the other a short story on Amazon.com, “The Comanche Moon.” He also received the Cowboy Hall of Fame and Western Heritage Center’s Wrangler award for his book, “The Sundown Chaser.”


Kerry Newcomb was born in Connecticut but had the good fortune to be raised in Texas. Newcomb is a New York Times bestselling author with over forty novels to his credit. He has been published in several countries.


Matthew P. Mayo’s short stories appear in a variety of anthologies, and have been finalists in both Western Writers of America Spur Awards and Western Fictioneers Peacemaker Awards. He also contributes to several popular series of Western and adventure novels and has a number of non-fiction books.


Robert J. Randisi is the author of more than 540 books in the Western, Private Eye, Men’s Adventure, and Horror genres under a number of pen names. As J.R. Roberts he is the creator and author of the long running series “The Gunsmith.” He also wrote and created the Tracker, Angel Eyes, Bounty Hunter, Mountain Jack Pike.


Rod Miller is author of Things a Cowboy Sees and Other Poems, published by Port Yonder Press. Other recent work includes a historical novel, The Assassination of Governor Boggs as besides poetry and fiction, he writes nonfiction, magazine articles, book reviews, and essays.


James Reasoner has been a professional writer for more than thirty years. In that time, he has authored several hundred novels and short stories in numerous genres. Best known for his Westerns, historical novels, and war novels, he is also the author of two mystery novels that have achieved cult followings, TEXAS WIND and DUST DEVILS. Writing under his own name and various pseudonyms, his novels have garnered praise from Publishers Weekly, Booklist, and the Los Angeles Times, as well as appearing on the New York Times and USA Today bestseller lists.


"They even allowed me to hang out with them in this collection:"


Terry Burns writes Christian fiction with a western theme and has over 40 books in print, including 10 novels. He has a two-book set from Port Yonder Press, included in The Sagebrush Collection. These contain the best of his short stories and a Young Adult book, Beyond the Smoke, won the Will Rogers Medallion in 2009.


How long has it been since you read stories from such well know authors? Well, that's too long.

Max, this book looks fabulous and is a tribute to a group of talented writers.