Sometimes it's hard to believe how fast time goes. This Veterans Day is one of those times. These pictures are from 1967 - 1968 when I served in the U.S. Army. I was drafted for two years of service. That's a term that not many think about today, but it meant that your local draft board, through Selective Service, could order you into the military.
My tour of duty sent me to Ft. Campbell, Kentucky, for basic training, Washington, and the balance took place in an armored battalion in Germany where I rode around on a tank for several months. I was fortunate not to have been sent to Vietnam, and have the utmost of respect for all who were sent there.

After returning to the states, I rejoined my father's film production and distribution company. And the first assignment was to shoot a film with Venture for Victory. http://17.taylor.edu/athletics/mbasketball/vv.shtml The basketball team we traveled with went to several countries in Asia. Would you believe that one of those countries was VIETNAM? I couldn't believe it. There I was, in a country I had trained to fight in, had feared I'd be sent there, and now, I was really there with nothing more to shoot with than a film camera. If I told you some of the things that happened to me, your hair would stand straight up.


Because of my profound respect for those who serve our country in the military, especially those who fight so the rest of us don't have to, I wrote a book for readers 8 - 13 that military families will love. When the Lights Go Out takes place on a military base where three boys, a secret weapon, and a terrorist plot collide. I hope you'll pick up a copy of this new book today. 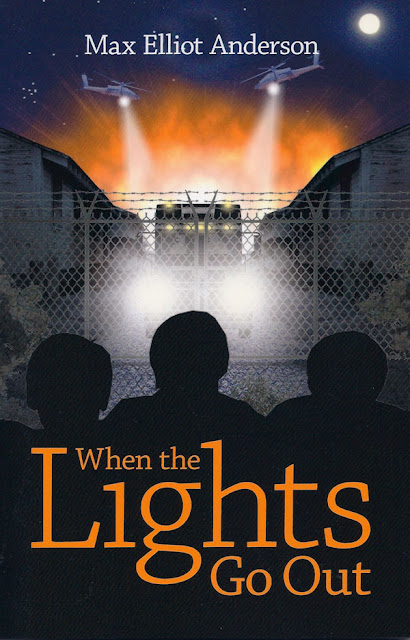 When the Lights Go Out video
Posted by max at 8:20 AM

It looks like a great read. I will have to go looking for it for my son. He is only four now and just embarking on the adventure of reading, but your books look like just the kind I am going to want him to read. :)

Thanks for serving with grace. Your sacrifice is appreciated. :)

Thank you Rachel. You're very kind.