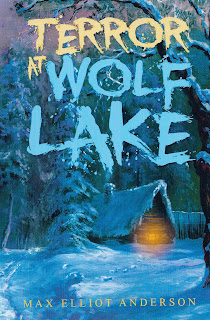 On these hot, summer days coming up, you might like to introduce your young readers to the winter story, Terror At Wolf Lake. This book reminds many of the movie, Home Alone with it's wacky bank robber crooks.


Synopsis:
Eddy Thompson's hero is John Dillinger, one of the most dangerous bank robbers in American history. So it's no surprise that Eddy cheats on anything, anytime, anywhere. With school out for Christmas, Eddy's father invites Chet, Rusty, and their fathers to drive up to a cabin he owns on Wolf Lake, Michigan, for ice fishing, tobogganing, and winter fun. But something happens there that will change Eddy's life. One day, two real bank robbers toss their stolen cash over the Eddy's fence in hopes to come back for it later, as police sirens race toward them. Of course, Eddy wants to keep it, and that's when their troubles really begin. With so much danger closing in and with the help of his friends, Eddy realizes how wrong it is to cheat. But the terror doesn't end there and follows them all the way back home.
And remember, kids say that reading a book by
Max Elliot Anderson is like being in an exciting movie.
"Max Elliot Anderson brings a lifetime of dramatic film and video production to the pages of his action adventures and mysteries." Jerry B. Jenkins, Author
Terror at Wolf Lake $9.99 is available from bookstores, online, and also as an ebook
Amazon:  http://www.amazon.com/Terror-Wolf-Lake-Elliot-Anderson/dp/1936695960%3FSubscriptionId%3D1QZMGW0RRJC2PX87HDR2%26tag%3Dsalranexp-20%26linkCode%3Dxm2%26camp%3D2025%26creative%3D165953%26creativeASIN%3D1936695960
Posted by max at 7:06 PM

Have you had anyone review your books? I would love to review one for my blog. Preferably a paper copy. Always looking for new books for kids.

Hi Linda. Yes, lots of reviews have been done. Usually this is arranged by my publishers.