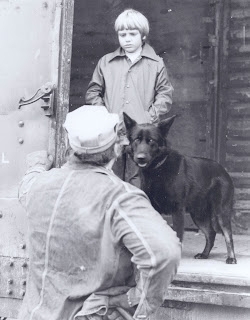 ﻿There is nothing funny about young runaways in America today. The National Runaway Switchboard is a hotline that handles more than 100,000 calls each year. It is with this alarming statistic in mind that a new book, Barney and the Runaway, is published.
Author Max Elliot Anderson tells us, “The idea behind this action-adventure for readers 8 and up is to draw attention to runaways. I thought it would be interesting to show a character who started out pretending to run away so his parents would miss him and stop telling him what to do, or punishing him when he disobeyed.”

This story becomes more complicated when Michael Ellis and his little dog Barney climb up into a railroad box car filled with hay. They intend to stay there only long enough for his parents to start worrying about him.


“But things get much more complicated,” Anderson continued, “when the boy and his dog fall asleep in the soft hay. A freight train backs into his car, to hook it onto its long line of other cars. The force of that impact jolts Michael’s box car, slamming the massive sliding door shut. Now he and Barney are prisoners.”


The train caries Michael and Barney clear across the country until they finally stop somewhere in Georgia, in the middle of the night. There Mike meets a grown up runaway who is now a clown in the circus. Big Bob helps to teach Mike that you don’t always know how good things are until they’re gone.


“Barney becomes the star of the circus,” Anderson said, “and this causes Mike to think about staying in the circus for good. And it’s Mike and Barney who save the circus from men who intend to destroy it. Then Big Bob reveals a secret about his life that changes everything for Mike.”


Wayne Walker says, “There is much to commend it. Of course, it is filled with action, mystery, and excitement that will keep both boys and girls turning the pages to see what happens next. But there are also important lessons that children will be able to discern along with Mike, such as the importance of family and the fact that we often don't appreciate what we have until it's gone.”


Lin Harris adds, “Mr. Anderson packs into this superb 5-star story the intrigue, mystery, and timeless life lessons that "tweens" will enjoy and parents will feel comfortable to read aloud.”


And Viviane Crystal said, “Barney and The Runaway is a great adventure story that is unpredictable and fascinating on every page. It's a great addition to the already terrific novels written by this very talented YA fiction author!!!”


Barney and the Runaway releases on March 1 from Comfort Publishing. Mr. Anderson’s Books for Boys Blog is located at http://booksandboys.blogspot.com/
and his author Web Site can be found at http://www.maxbooks.9k.com/ 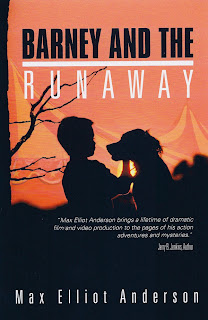 ﻿
Be sure to come back tomorrow for an update.